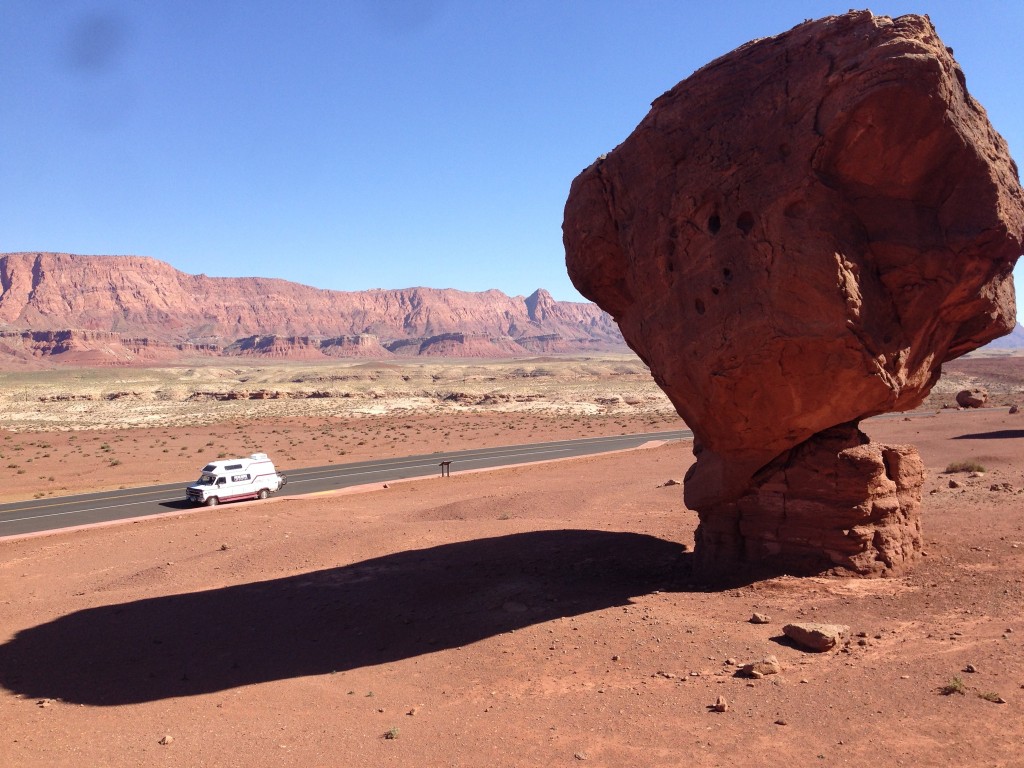 Chris and I woke up behind a motel in Kanab parked next to the dumpster. It was classier than it sounds. I pulled out the fresh farm eggs we had gotten from John and Rhonda and made scrambled eggs and turkey bacon in the parking lot. Taking advantage of our rare access to the internet, I had to check my Facebook one more time before hitting the road.

Along our way through the red desert of next to the Grand Canyon, a French couple driving ahead of us had to pull off the side of the road. They had hit a pot hole in the road and their front bumper ripped off, but was barely hanging on. I pulled off the road next to them and pulled out my favorite tool: neon green duct tape. Within a few minutes their bumper was reattached and looking better than ever with green tape stripes on the side of their car. In return, the French couple bought Chris and I a drink at the local restaurant. They were travellers like ourselves and had spent 3 weeks traveling around the west coast. Their next destination was the Petrified Forest National Park. We decided that we would make this a destination in our journey too.

Saying our thanks you’s and goodbyes, we drove to Lee’s Ferry Campground, next to the northern point of the Grand Canyon National Park. This was right next to the Colorado River so we had to jump into the water. We quickly learned that we should have had a wetsuit! The water was nearly freezing! It was a short experience in the water, but we got to lay out in the sun and watch white water rafters practice for the teaching licenses.

Enjoying the sun and water, the sun began to set and we decided to continue to the next town to find a place to sleep. We managed to drive until 10:30pm, which took us to the Native American populated town of Tuba. This time a Denny’s was home for the night. Chris and I set up our beds and decided to watch a movie before going to bed. One hour into the movie we heard barking outside our car and thought someone was there about to kick us out of our location… worse. I looked out from behind our curtains to see a pack of wild dogs! The alpha dog looked like some sort of a pitbull descendant and was thick with muscle. That means this guy was finding food somewhere! With some bad luck Chris and I both really had go to the bathroom. So when the dogs had finally gone a block away one of us kept lookout while the other went over to a bush. We were like a tactical bathroom team.

Happy to not be sleeping in a tent, we went to sleep in our beautiful RV as the wild dogs howled us to sleep :)

1
Happy Journal - Nature vs. People
Never underestimate what you can accomplish